*Note: This post was originally written Sept 24 but never posted.  I have updated it, but the general tone is from then.  The tone of how I feel now is probably better captured in our last post.

Josh and I do not tell people when we are trying to get pregnant or talk specifics with anyone other than each other.  It’s a very personal matter to us.  And while some people began asking “When are you going to have more kids” as soon as our twins turned one, we never told them what we talk about behind closed doors.  We just aren’t “those” people.  So, to write a blog post about not only our recent attempts to get pregnant, but also our losses is really hard and makes me feel slightly awkward to do so, but, we’re trying to keep things real on our blog. Sadly, I have joined in the ranks of millions of women who have suffered a miscarriage (some sources say 1 in 4 pregnancies end in miscarriage, while others say 1 in 7).  Josh and I started trying to have another child in August and got a faint + line on a pregnancy test (inconclusive) but then my period started two days later. 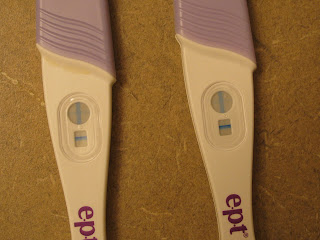 Then in September we decided to try again, getting an ovulation kit and everything.  I did not feel pregnant though my period was again late that month.  And after a night in the bathroom with diarrhea, fever, and even throwing up (breaking my 4.5 year streak of not throwing up, including during my first pregnancy – I know I’m lucky!) I thought I was just sick, but my husband thought otherwise, so I took a digital pregnancy test and within only a minute it was clear – I was pregnant! 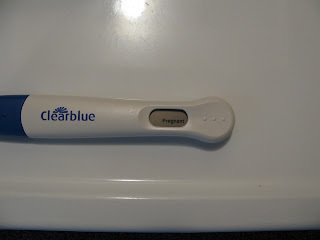 We were excited.  I was shocked.  I really didn’t feel very pregnant, but I remember feeling much the same way the first time around.  However, the next day I began to bleed, and even though we hoped it would stop, it only continued, turning into a heavier period than normal.

We took a month off and again tried and succeed in getting pregnant the end of October/beginning of November, before Josh was in his wreck.  And as explained in our last post it didn’t end so well either…

Of course we are saddened and hurt.  We really want another child.  We both want a baby (preferably a boy) and this seemed to be our little window to get pregnant in order to make things less complicated before next summer, when we may be moving again (and perhaps to a different state, thus complicating insurance/doctor selection) due to graduate school.  We prayed about the timing, and all of my many doubts and worries were calmed.  So we tried and succeeded in getting pregnant, but not in staying pregnant or ultimately receiving the desired result – a baby.  It’s hard knowing that as you continue to bleed during a miscarriage, each drop and wipe of blood represents a piece of you that will never be.  I often thought to myself, “That’s my baby.”

Though saddened, we are okay.  I guess I feel fortunate in a lot of ways that I wasn’t already “showing,” that I hadn’t spent weeks getting excited about what was to be.  I also had this feeling (or just great fear) that I would miscarry again, so I guess I was prepared in a way.  We also didn’t tell everyone so it’s easier to get over.

It seems easier to handle, I think, than if I would have lost a pregnancy or a child later on, like one of my sisters did almost two years ago.  She lost her growing child right before being 12 weeks pregnant.  She had told everyone she was pregnant right away.  She was very excited to be expecting their first child!  And the sadness and hurt deeply affected her and her husband for months.  I did not know how to help at all.  I even made matters worse because I was pregnant with my twins at the time (almost due) and then had them.  And I wanted more than anything to be able to talk to my sister, my best friend, about the exciting new changes that I was facing, but by doing so, made her hurt more tender.  I’m sorry to her for talking about it all, but I just didn’t understand to a large degree.

About the same time that my sister suffered her miscarriage, one of my old friends from college also suffered a miscarriage. and at about the same point in her pregnancy as my sister (12 weeks).  She shared her experiences on her blog, as did another one of my friends from college. She suffered a miscarriage about the same time I did (Sept) and was a week further along than me.  Her pain was more dear, especially as people frequently ask her when they will be having more as their son just turned two.  Thankfully no one really expects me to me trying again…  (Most of you probably think we are absolutely crazy!)

But no matter if my friend and I were only 5 or 6 or 7 weeks pregnant, the loss was felt. Losing a pregnancy, whether in the very early days or after a full nine months is hard for many women.  My own mother had a still-born daughter. And one of my friends from long ago just suffered a pregnancy loss at about 6 months pregnant.  What she wrote on her Facebook wall really touched me and is so hopeful:

“I’m so grateful for the time I have had with you. I’m sad that it will seem a long time before I get the privilege of raising your perfect spirit but I’m glad that the Lord trusted me to send you to me for the short time you needed to be here. I’m proud that such a perfect being is one that I can call mine. … Can’t wait till we get to meet again, being reunited in our perfect forms through resurrection. How grateful I am for the Gospel of Jesus Christ and the knowledge it gives me to know we are sealed for all eternity and that this is but a short time here on earth that we will be separated. Rest in peace my child, Love, your mommy.”

What I love about the gospel is the peace and assurance it brings, even in the midst of tragedy.

I really haven’t cried that much about my own loss.  Each time the first two days are the hardest on me.  I cried as I admitted to Josh that I was miscarrying, when I called my sister Brittany on the phone, and a few times when I sitting on the toilet or thinking about the whole thing.  I got choked up a little as I had to tell the nurse at the doctor’s office that though I had been pregnant I more than likely was no longer.  Vocalizing the sad truth is hard. The doctor told me that since I have had a very successful first pregnancy, and with twins, that it’s unlikely that there’s something going on “down there” other than a common miscarriage.  He gave me a book called Empty Arms: Hope and Support for Those Who Have Suffered a Miscarriage, Stillbirth, or Tubal Pregnancy

by Pam Vredevelt which I have skimmed, but seems more than I really need, but that he said many of his patients have found extremely comforting.

Sometimes I am thankful for one of greatest imperfections; that I’m unsympathetic.  I am a tough woman.  I try to look on the bright side.  Even though life has been one giant mess lately, I still feel generally happy.  I have never been depressed for longer than a few days in my life.  Some days are extremely hard, but I just take each day at a time and generally just keep rolling with the punches.  I guess perhaps I am even unsympathetic to myself.  I think I must mentally tell myself to “buck up.”  Perhaps at times this weakness of mine is one of my greatest strengths.

We’ve decided to take a break in our baby making endeavors.  I am unsure when we’ll try again, because it did seem like our one little window to get pregnant for a while, and the pain and fear of another miscarriage is daunting.  We don’t want another miscarriage.  But, we’ll do what we always do – pray about it and do what we feel is right.  Maybe God knows that having two-year old twins and a newborn wouldn’t be the best for us after all.  Josh felt like it was ultimately up to us to try or not to try these last few months.

Josh and I are also extremely grateful to know that families are forever, continuing on past this life, since we are sealed in the temple.  We also know things do happen for a reason. We have much hope.  We are still very young and have lots of prime years of child bearing ahead of us.  Yes we wanted to have a child come the end of May or the end of July, but that’s okay.  Life moves on.  Pain heals.  We know we will be blessed to have more children because we righteously want more, as Neil L Anderson told us in this last General Conference.

Josh and I love being parents and though I often express how perfect our little family of four is, we want more, and hopefully not in the too far distant future.