For Christmas I gave Josh 24 pre-planned dates for the year, 12 stay-at-home, 12 out.  For Valentine’s Day we did one of the stay-at-home ones.  Since Paris is the City of Love, I did a Paris, France themed date night.

I used a free date night kit I received from definitionoflove.com.

The date night kit I used had all sorts of ideas for how I could go all out with the theme, from food to serve, music to play, things to wear, how to decorate, and more. A Night in Paris Theme Date

The first thing I did was invite Josh to “A Night in Paris.”  Since he would be coming home late on Wednesday night (the day before Valentine’s Day), I left out his dinner and this Paris-themed invitation for our date: 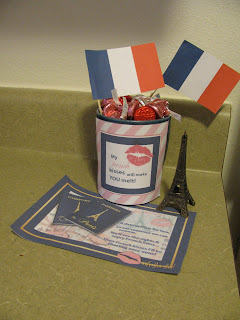 Earlier that day I had started some French bread so that I could make it fresh on Valentine’s Day.  I ran to the store and bought some fresh fruit and cheese to have with our bread, which ended up looking like bread sticks, but which still tasted good, even if the crust ended up being extra crispy/hard.  If I was on top of things even more I could’ve made French toast to start off the day. (Did I mention I’m not much of a cook? It’s the effort and how it tastes in the end, right?) 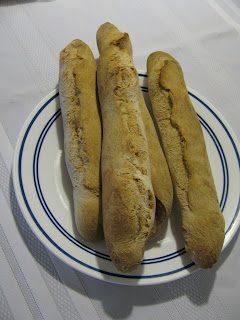 I put out a white table cloth on our table, added an Eiffel Tower statue which I borrowed from a friend and a candle (which we didn’t even light), and set out our spread.

We didn’t have a real entree.  I guess I was a little intimidated by French food and knew I wouldn’t have a ton of time to cook it either.  So we just ate bread, cheese, crackers, and fresh fruit for dinner with the kids. 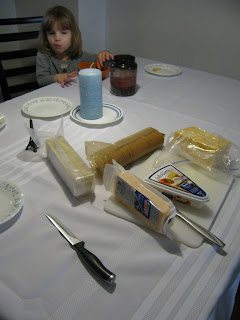 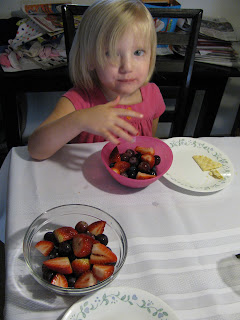 We talked to the kids about Paris, France, and the Eiffel Tower and countries and continents a little too.  If I was on top of it, we would’ve had some awesome French music playing too, but I wasn’t.

For dessert I made crème brulée for the very first time!  I used THIS recipe from delish.com.  But, since I made it too late in the day and it needed to chill in the fridge for at least four hours, we weren’t able to have it right after dinner.  We were going to eat it the next night but I totally screwed it up!  I turned on the broiler in the oven and let the crème brulée sit under it for far too long.  So, when I opened the oven, the tops were black, bubbling, and one was on FIRE!  I mean seriously?!  Here’s the before and after: 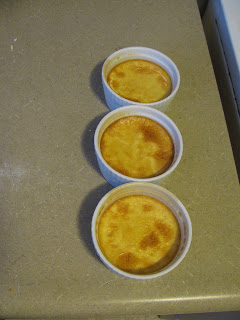 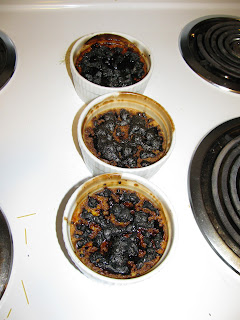 Remember how earlier I said I wasn’t much of a cook? Yeah, further proving my point! Oy!

I scraped off the burnt part off of one of them and we ate the rest of it, as that part tasted very good thankfully.  Oh, how funny.  I laughed at myself hardcore on this one.  Here’s the one I ate part of: 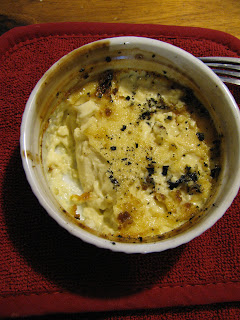 Even though there are several great Paris or French related movies out there, I ended up renting a romantic comedy from Redbox for free with a code, that night. Now, I am glad I don’t have to run to Redbox and can watch all of these movies for $1 with VidAngel (have you used their movie filtering service yet? It is awesome!) Here are some of the French themed movies I thought about watching:

My friend also recommended that if we watched a movie we owned, like Ratatouille, we should play it in French with English subtitles to make it extra special!  What a great idea.

However, we decided instead of staying in to watch a movie to take the girls to the dollar theater to see Wreck-it-Ralph since they had ended up taking a nap until 5pm (and we’re always leery of having them watch unseen movies with us)! Thankfully they sat through the whole thing (though some of that on our laps) and said that they liked it afterwards!  It was our Valentine’s Day treat to them I suppose, since we have only attempted taking them to the theater a handful of times or less.

The Dating Divas have other great (Free!) Paris, France themed date ideas too:

It was a pretty good Valentine’s Day for the Fagan Family!  While I didn’t do everything I ideally would’ve wanted to make it a very Paris-themed day, I did something different and it was fun.

What did your family do?