It finally happened.  I played the organ at church for a Sacrament meeting.

After six years of piano lessons, from the 7th grade to the 12th, I finally used my piano skills in front of my entire church congregation.  And I was so nervous about it, though my mother is glad I finally played the organ at church, as that is probably the number one reason she agreed to let me take piano lessons all those years ago.  That’s right: I asked to take piano lessons.  I was one of my only siblings to actually take lessons.  So, for the investment my parents made in paying for the lessons and taking me to them week after week, I’m sure she’s glad I am using that talent at least sometimes. 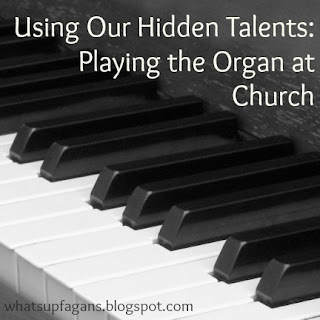 So, maybe it is surprising that it took so long for me to have to play in a Sacrament meeting.  I use the word “have” because I am usually not forthcoming in volunteering my skills and talents in this regard.  Because, truth be told, I don’t really like playing the piano in front of people.  Piano concerts were so nerve racking!  I always sped up, I always screwed it up.  Always.  And I don’t know if that will ever change, as today was no exception.  Mistakes were definitely made.

The thing about playing piano/organ when you go to BYU for college, though, is that almost everyone plays the piano at BYU.  My freshman year two of my five roommates played piano really well, and I think one or two of the others could at least plunk out some songs on the piano.  And that was fairly common to BYU apartments.  So, during my four year stint at BYU, my meager piano skills were never asked for, and I never volunteered them.  During my college years, I instead used my other musical talents – playing French horn and singing.  And I hardly ever practiced piano during those years, as I didn’t have much need to (really except for during the organ class I took).  In the years since college, I have only had to play the piano here and there at church, but mostly for Relief Society meetings or for a minute or two in Primary.  There’s less pressure when there are few people there, and therefore, less judgment (real or perceived).

So, because of my spotty piano playing in the last seven years, I was really hesitant to take on this assignment from the member of the bishopric who asked me to do so.  I am just filling in for this week and next. The regular Sacrament meeting organist is on vacation.  Her first choice for back-up is also on vacation.  And lots of other people are also on vacation, and apparently of those who would be around, my skills were better than most.  So, I was asked to play.  And I agreed, hesitantly.  Four songs to prepare in one week when I hadn’t played the piano/organ much in the last seven years was a daunting task.

After practicing three times this last week in order to prepare, and then finally performing today, I am grateful that I accepted.  I am also grateful that I had the common sense to get over myself and just do my best.  So, YES, I screwed up.  Yes, I played wrong notes and didn’t stay on tempo very well.  But, I did it.  And I did my best.  And I didn’t do all that bad!

And I wasn’t that nervous, thankfully.  I reminded myself to breathe, and to just keep going when I messed up.

I took some time this week to stop and think about the talent that I have, and the opportunity I have to finally use it. I thought about this scripture:

Neither do men light a candle, and put it under a bushel, but on a candlestick; and it giveth light unto all that are in the house. Matthew 5:15

I realized that my talent was my light, and that I needed to put it on a candlestick (on display) so that it could be shared with all who were in the house, or the church chapel today.  Doing so filled the Lord’s church with light and music, and, thereby, the spirit of the Lord.

I also thought about the parable of the talents found in Matthew 25.  I didn’t want to be the wicked and slothful servant who buried my talent in the earth because I was afraid to share it, to take a risk.  I wanted to be like the good servants.

Several, several people thanked me for playing the organ today, for sharing my talent.  Most were impressed by how well I played.  Some didn’t even know I could play the organ at all (as it was hidden) and were glad to see my talent, grateful to have that music today.

I am thankful that I played as well as I did, but I know that I had God helping me.  He was sustaining me.  He didn’t make my fingers play perfectly, but he gave me the confidence I needed to do what was required of me.  And for that I am thankful.  And I am thankful I got to use my hidden talent again.  I really miss playing the piano sometimes, often dreaming of the day we’ll own our own piano, and have our children learn how to play it, too.

What hidden talents do you have? When was the last time you shared them?