↑
PARENTING » TWINS » How to Transition Twins to Toddler Beds
7shares

My sister just recently announced on Facebook that she decided to move her 14 month-old son (who is almost as big as my girls!) over from his crib to a toddler bed because he could put his leg up on the crib rail.  To which I said: “You’re crazy!  Keep babies in their cribs as long as possible!  They can’t get out and escape!  It’s great for time-outs!  Why at such a young age?”  I’m a very supportive sister can’t you tell?

I desired to keep my twins in their cribs for as long as possible… but it looked like my twins and their cousin were vibing the same wavelengths this past weekend because on Friday Lisa climbed into Alison’s crib, and then Alison (with a little help from Dad to get her started) also climbed into the crib.

Then yesterday, Sunday, during nap time, we heard a loud boom and then crying… (something I was told would happen someday) and walked in to their room to find Alison lying face-down on the floor, next to her crib, crying.

It had happened: my baby climbed out of her crib (or rather fell).  After a quick assessment we saw that Alison was fine, though Lisa, though sleepy, looked on at her sister with a slight look of shock and wonder.

So after my kids proved they could climb in and out of their cribs my husband and I decided it was time.  Time to transition my not-quite-two year old twins to toddler beds.  The time of crib-dom had passed.

So tonight our activity for FHE was to take off the front part of their cribs, thus converting them to toddler beds.  They were very excited about it and we made it a big deal, telling them it would mean they are big girls now, but that they needed to sleep on them when it was time to sleep/nap, but that it meant they didn’t have to wait for Mommy or Daddy to get them out of their cribs in the mornings or after nap time. 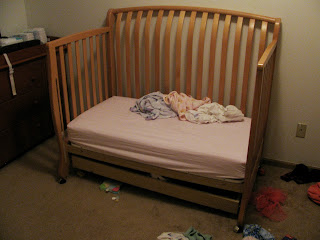 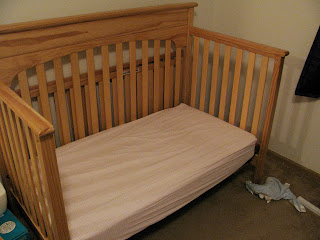 The girls went to bed without a hitch tonight (well minus the fact that Lisa was feverish and very tired.  Poor thing has a sore throat: I hope it’s not strep or something!).  No opening of the door.  No screaming.  No crying.  No fuss!

I am worried about the rest of the night and the morning.*

Transitioning from crib to toddler bed is bittersweet for me.  It means my children are not babies anymore.  Babies sleep in cribs.  Toddlers sleep in beds.  It means they are really growing up.  In one month from tomorrow they will be two years old.  Two two-year olds.  I don’t know if I am fully ready for that!   But, one step and one milestone at a time, right?

What have been your bittersweet moments as a parent?

*By the time I was done writing this Lisa woke up and came out .of her room, one hour after bedtime.  But, I attribute it more to her being sick.  Poor thing.