Did I tell you that Josh and I actually have a cell phone now?  But, don’t get too excited.

Our cell phone and service were given to us free from the Access Wireless, a Lifeline Assistance Program, through Kroger iWireless.  Since we’re on food stamps/medicaid for the girls, we qualified to receive an old phone (ever wondered where your recycled phones went?), and 150 minutes a month with texting.  But, we earn free minutes by shopping at Kroger (another reason we love Kroger) and our leftover minutes rollover. 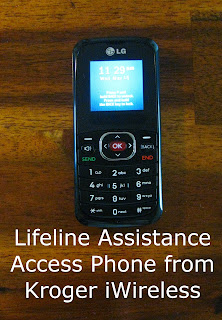 We’ve mostly used the cell phone for texting, and the occasional phone call.  This is perfect for us since we really just want a cell phone for emergencies/conveniences.  We still use our home phone as our primary phone and almost all of our phone calls. But, we are grateful for this cell phone option, because we didn’t love the pay-as-you-go phones, mostly because we kept forgetting to buy more minutes so the service wouldn’t expire, and never used all the minutes/texts that we ended up paying for.

But, two weeks ago, as my friend and I were spinning around our other blindfolded friend (who we had just kidnapped from her house and drove around for a while) in the lawn outside her surprise birthday party at a different person’s house, my phone fell out of my purse.  And I didn’t know that’s where I had lost it until after it had been doused in torrential rainwater, and almost eaten by a lawnmower (when it was found).  It  was put in rice for about a week.  Sunday, I finally got it back from the friend’s house the surprise birthday party was at.

And surprise! It turned on after the battery was charged!  And it sent and received texts!  And the screen worked perfectly!  And the phone rings when a call is coming in!

But, it has lost all calling capabilities.  If you make a call, you never hear a dial tone or a ring or a person’s voice, and they never hear mine.

Our phone has lost its main purpose – calling and talking.  We now just have a texting device; and I’ve mentioned before that I don’t really like texting.

I finally called the company today and requested a new phone.  Luckily we had some credits on our account that will be going towards a new phone.  Yah!

I think these phones and I don’t have the best of luck.  While I have been known to drop my cell phone occasionally in the past, I never broke a phone before or had any major issues with my phones.
But, with iWireless this isn’t the first time we’ve had problems with one of their phones.

In fact, the first phone we received after we signed up for Access Wireless, last December, lacked the capacity to charge the battery, proven by testing out two different phone chargers.  They then had us send it back to them (it was a really old phone model) and they then sent us our current one (a tad nicer).  Maybe the next one will be even a tad nicer still?  But, three phones in five months is not a great record.

I’m not trying to complain too much since they are free for our family to use, and we still had a working phone during this time, thank goodness.

What have been some of your phone mishaps through the years?  Ever dropped yours in the toilet?  Broken the antenna?  Lost it?  How many phones have you gone through in a short period of time?  I’d love to hear your stories!
2shares