Her most common drawings are of “spiders” as she calls them.  They really look more like suns, but she insists they are spider.  She draws a circle with lots and lots of spider legs coming off from it.  And she now even draws two eyes and a squiggly smile in the center of the circle.  It is super adorable. 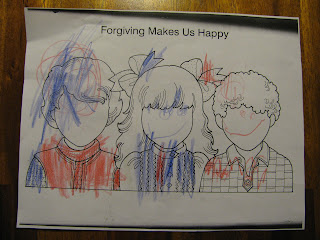 Here is a handout from church.  This was the first time I had seen her draw eyes and a mouth on a drawing.  I asked Josh if he drew them on there a few times because I was so amazed!

And then she often “writes” down letters and names and numbers, by creating a continuous stream of peaks and valleys, something I remember doing as a kid to imitate my mother’s cursive handwriting.  It’s super cute because as she does so, she’ll say, “This says ‘Mommy,’ and here’s ‘Daddy’ and ‘Sissy.'”

She will often make requests of me to write these names down for her or draw a certain object.  But, I really want her to explore her creativity on her own.  But, I enjoy art, so I generally try to appease her desires.

What I find really interesting is that Lisa, if she gets a hold of the pen we were using to do the crossword puzzle or sudoku puzzle from the newspaper, she will carefully make tiny little marks in the little boxes.  She also loves books and will flip through and narrate them by herself often now… but this post is supposed to be about her artistic skill, so more on that for a different day I supppose.

Alison is different than Lisa in her love of coloring and drawing.  While Alison certainly colors and draws rather frequently as her sister does so often (and they seem to want to do the same thing at the same time, all the time), she just doesn’t generally seem as passionate about it.  Alison too will draw “spiders” and circles, but she doesn’t want to do it all day long like Lisa does.  She’s usually done coloring after a few minutes.  She does seem to like to explore more with what she draws on, and is often found coloring on the table or chair more than on the paper.  Or on the walls. 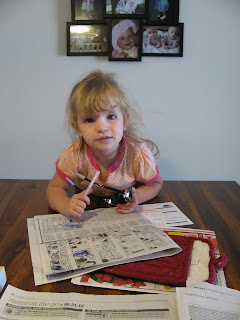 I mentioned in THIS post that my girls colored the walls in their bedroom with crayons (again) about a week ago.  And here are their “masterpieces” (which are still there): 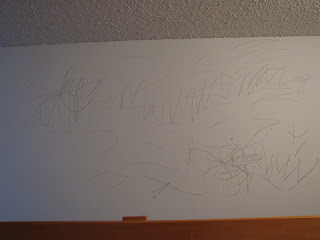 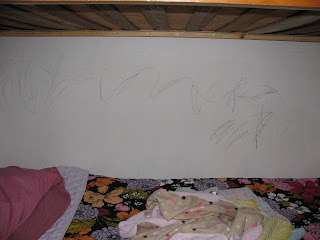 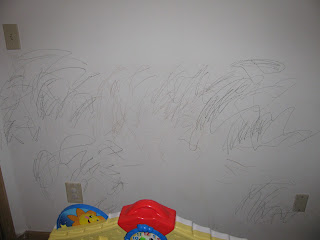 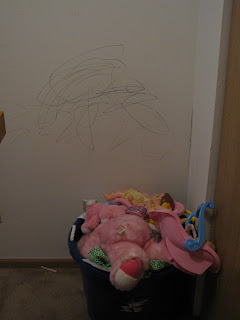 Alison also really likes to dump the crayons all over the floor but also to put them back in the box or container.  She’s more organized and likes picking up things way more than Lisa does.  But, this can often create sibling annoyance, because Lisa wants to color and Alison is chucking her crayons everywhere.

While they both have different levels of interest in art at this point in their early lives, I am just so glad that they both generally enjoy it!  I greatly look forward to their next creations and developing abilities in this realm.  It’s just so exciting to me!  I think they are amazing!

What are your kids favorite things to draw?