1. We made snowflakes for FHE (as part of our 25 days of Christmas) and Josh and I have continued making more throughout the week.  It’s been a ton of fun!  I used the cutting guide (HERE) to make some and then made one on my own which turned out pretty cool and intricate.  I think by the time Christmas rolls around most of our windows may have snowflakes in them…. 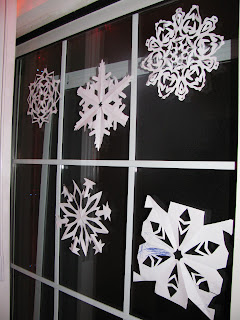 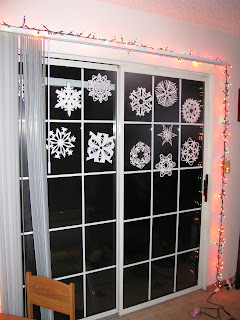 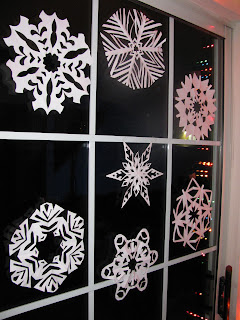 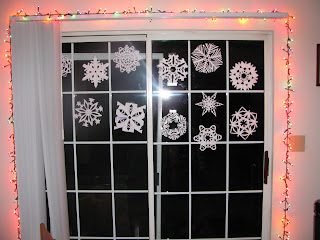 2. We went to the Indianapolis Children’s Museum again this week for playgroup and checked out the Jolly Days exhibit.  My girls weren’t very impressed however…

3. We received a phone call from our lawyer this week.  We should be settling very soon!!  Probably before Christmas.

4. I read the books The Christmas Shoes

by Donna VanLiere and Matchless: An Illumination of Hans Christian Andersen’s Classic “The Little Match Girl”

by Gregory Maguire this week for my book clubs next week.  Matchless was so short I read it to my girls in one sitting.

5. This was Josh’s last full week of school!!  Next week finals begin.

6. We had our carpets cleaned yesterday!  Remember how a month and a half ago we had some flooding in our apartment (see THIS post)?  Well, we were left with some white water marks on our carpet and a carpet that felt not so soft and kept telling the office that we needed our carpet cleaned and they kept not doing it.  I called three times.  Josh finally went in into the office this week and demanded that they fix it.  So they came yesterday and cleaned our whole downstairs carpeting and our stairs.  Clean carpets is a Christmas gift to me for sure!  No more nasties under the dining table!

7. I got Comcast to remove the $60 charge for a technician to come to our apartment and “fix” our internet.  It took two phone calls, but, man, am I glad I called twice.  The first lady was such a jerk about it and the second lady helped me instantly!  I was not ready to pay twice our monthly bill for a technician who didn’t end up doing much, especially when I was never told beforehand that I would be charged.

8. I talked to my college roommate Heather on Sunday!  It was great talking to her.  She’s always super busy and two hours behind so we have a hard time catching each other to talk.

9. This morning I was Miss Popular!  Or at least Miss Babysitter.  I watched two 18ish months old for an hour so their Moms could go visit a sick sister in the hospital. 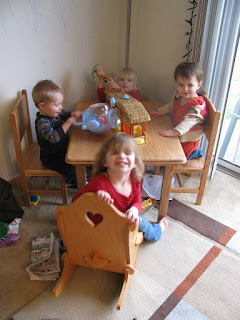 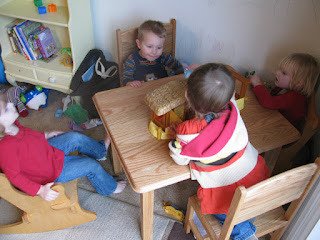 And just as they were leaving with their kids, I received another kid the same age as mine, to watch for an hour so her parents could meet with their bank about refinancing their house, which they ended up doing and receiving a great deal.  I also talked to the Relief Society President who asked if the Activity Day Girls and I could help run the Christmas Bingo game at the ward Christmas party tonight.  I also talked to my sister Brittany for a while and even my mother-in-law briefly.  And that was all before noon!  Much busier than I usually am on a Friday morning, but the girls had playmates and I got to help some people out.

10. Tonight was the ward Christmas party.  While I think the party is a tad lame as it’s just a dinner and Santa pretty much, the food was yummy (said the pregnant woman) and I got to call the Bingo game.  The girls were not so excited to see Santa, particularly Alison.  When it was time to go up to him, Alison burst into tears when Josh tried putting her near Santa.  lol.  Lisa didn’t mind though… she got candy! 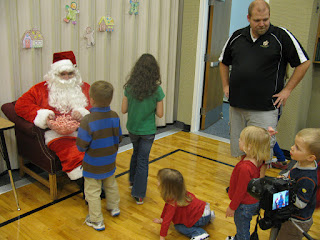 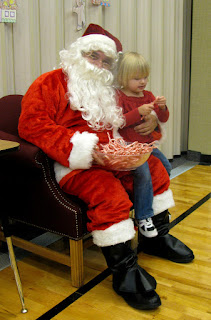 11. We got our Christmas cards in the mail this week.  They looked great, even though JCPenney said we shouldn’t use our “low resolution digital image” for printing.  Bah.  We saved a ton of money using it and the picture quality is fine.  We added a personal family message on the back of the cards and mailed off most of them.  We’re still waiting on a few friend’s addresses, but otherwise, they’ve been sent out and received.