This is a sponsored post written by me on behalf of Huggies® for IZEA. All opinions are 100% mine.

My son just turned two years old two weeks ago! In his two years of life, he hasn’t been all that different in temperament or disposition from his twin older sisters. Certainly his personality is different than both of theirs, or more of a mix of the two, kind of like his looks fall somewhere in between his fraternal twin sisters’ very different appearances, too. But, one thing is for sure: he’s adorable and I love him like crazy. Having a single child has been so different from having twins. I instantly fell in love with my son, which isn’t something I can honestly say happened with my twins, for various reasons (C-section, how long it took until I held them, and other things). With my son as a newborn I just couldn’t get enough of him! He made me feel so happy.  And compared to having two newborns and two one-year olds, the first two years of his life have been so much simpler and easier. And in many ways I feel like he’s been spoiled, except in the amount of pictures and videos taken of him department.

But, I don’t mind snuggling with him for a long time, in part because I don’t have to worry about another child who needs me.  In so many ways, he has been so incredibly easy in comparison. In many ways having a son has been easier than having the girls. Granted he’s a single baby and not twins. While he did wake up during the night more frequently and consistently at night than his sisters, he was a pretty easy babe and a not too terrible toddler (yet).

Because, my son Michael is such a sweet guy, with the longest eye lashes, and biggest blue eyes around. He’s been winning hearts of old ladies since the day he was born with those eyes! He’s a true charmer, and loves to smile, wave and say hi to strangers, and then slouch his head back into his shoulders all bashful like.  He loves to shake people’s hands and isn’t really afraid of people, though he is a bit of dogs. Michael snuggles frequently, and will find his way into your lap or immediately next to you, preferably with a blanket nearby, multiple times in a day. He also loves giving kisses, receiving kisses, and resting his head on you.

Michael naps without much of a fight, as long as he’s at home, even though he can now climb out of his crib like a pro. At nap time he likes to have a drink of water (or “cup” as he says), be sung a song, be tucked in with blankets with his head on his pillow, and have his belly rubbed. He sleeps through the night, and first thing in the morning may climb out of the crib, and run into our room, and snuggle with mom and dad in our bed.

When he isn’t snuggling, being held, or in your lap, he’s often begging for food. He can eat! Right now he will try and eat most things presented to him, which is awesome. He loves bananas, yogurt, toast, butter, peanut butter, milk and cereal for breakfast, pasta, grapes, peanut butter sandwiches, cheese, crackers, and more. Just like his older sister Alison, our son still sucks his two middle fingers on his left hand. But, unlike his sisters, recently stopped breastfeeding officially at 23 months, whereas I stopped nursing my twins at 13 months. It’s been a little bittersweet, but I’m thrilled he still gives me plenty of snuggles!

Our son loves to scream, makes some sort of (loud) sound every minute when he’s awake, especially at places like church, and will say the word “yep” instead of answering questions or repeating words you asked him to say. Mikey hasn’t been the quickest talker (and neither were his sisters), but what he says is nice and clear. But, with two older sisters, and more individual attention, he may not feel the need to articulate as many words yet. At two years old his best words are: yep, no, mine, momma, dada, Ali, shoes, go, car, dada (banana), cup (which is any body of water), juice, up, help, toast, toes, eyes, elbow, nose, cheek, boob, butt, butter, choo-choo (train), why (as in Super Why!), ow-wa (owie), pot-pie (potty), owl, dog, kitty, blurdie (birdie) and pretty.

Mikey has shown interest in using the potty for months, and we’ve made half-hearted attempts at potty training him here and there. He loves to sit on the “pot-pie” or “pot-pot” and try to go potty, and on the real toilet, mostly so he can grab toilet paper and wipe, even though he hasn’t used the facilities. One of his best and clearest words is “butt” and will go up and touch people’s butts (and yes, even a few strangers before to mortification) and say the word “butt.” When someone farts, he also exclaims “Butt!” (We are totally potty-humor people in this house, so we roll with it.)

However, Michael it seems still isn’t quite ready to be potty trained, though we’ll still appease him for the time being with sitting sessions on the toilet before bed or baths. But, he’s funny because he will, after having a bowel movement, often let us know he needs a diaper change by bringing over the wipes and a fresh Huggies® Diaper and then proceed to lie down. He may still make us chase him around a bit after his bottom has been wiped, but eventually begs to have his diaper put on. One of the biggest differences between our twins and our son is the diaper brand we use. We were told by many friends that Huggies diapers work better for boys, and they were right – they do! We’ve used many different styles of Huggies and recently tried out their new Huggies® Snug & Dry Ultra Diapers at Walmart.com. They offer Ultra Protection and Ultra Value, which is perfect for a diaper. 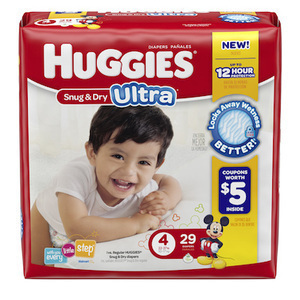 I really liked the quilted liner and felt that it locked away the wetness better and kept my son dry all 12 hours he sleeps at night, which sometimes is hard to do (he likes to have that cup of water before bed!). The great thing about diapers that work all night, is that I can put him back in the same Jammies again the next night and not have to change his sheets as often. And he just doesn’t reek of urine. Definite plus! Other exciting things about our son is that he is finally getting to the point where he is more playing with his older sisters instead of simply besides them. He didn’t use to understand that his sisters were running away from him, but now he gets it, and will scream and chase them, especially when he’s wearing a dinosaur or skeleton or bug on his shirt! My kids have always loved being chased and running. And my son can now run and definitely bolts!

In the last week, we’ve lost him twice in a store (Best Buy and then Hobby Lobby) when we put him down for 3 seconds. The first time my husband had him and put him down to get a cart to put him in, and then he was gone. The second time I had taken him out of the cart and into the bathroom so his sister could use the facilities, but as I was waiting on Alison to finish drying her hands for four extra seconds, he had bolted out the door and disappeared, right to the front of the store (thankfully he didn’t go out of the store!). We also have to watch him and the front door, because if it is unlocked, he will open it and bolt away, sometimes straight across our little parking lot. The same is true when we are all leaving to get in the car. He’ll make a dash for it as I’m working to lock the apartment door, and put the diaper bag in the car. And he doesn’t much care for holding hands while walking (but none of my kids really have). But so many of those stereotypical “boy” experiences we haven’t really had. He didn’t run before he could walk. He doesn’t constantly destroy things, and has in fact put far less objects into his mouth than even one of his sisters ever did in one year’s time. He only peed during a diaper change like a handful of times (as did his sisters in those newborn days).

He does climb more, but I attribute that more to having hard floors and the dining chairs right in the kitchen in our new home than him just being extra good at climbing. He has yielded knives and scissors more than his sisters did at his age, but mostly because he has sisters who leave them out and pushes those chairs up to the counter with ease. He eats just as much as they did. He loves to tell us what he thinks is pretty, putting on other people’s shoes, and recently snuggling and caring for his sister’s baby dolls. Sure, he loves cars and his brand new train set, but so did my daughters. For me, I just don’t understand how my son is really any different than having a daughter other than natural disposition, private parts, and his attentiveness to the television screen at a much younger age.

What have been the difference between your sons and your daughters? Have they been more pronounced than they have so far for me?