Why this service project?

Did you know that over 51 billion pieces of litter land on U.S. roadways each year?  That’s a lot of pieces of trash!

Also, research and experience have shown that litter is the result of individual behavior—choosing to litter or being careless in the handling of waste.  And once litter is on the ground, it attracts more litter.  A clean community, by contrast, can discourage littering and improve community appearance and quality of life. (source)

We have a role to play in preventing litter.  It takes just one person, one school, one business, one organization to positively impact the behavior of others in their community.

I wanted my Activity Day girls to be that positive influence in our community.  This stretch of road certainly fell victim to the “litter attracts more litter” influence.  And I want to teach these young girls that littering is not good, ever, even if an area is already trashy.  Litter leads to pollution of our soil, air, water, and wildlife.  It is irresponsible to litter.  Littering treats God’s beautiful creation with disrespect.

To prepare for this night, I contacted local organizations (like Keep Indianapolis Beautiful Inc) who do litter cleanups to see if there were any additional resources available to us or if someone could come and talk to the girls about pollution and littering, but no one was available that night. I also checked if there were any city-wide cleanups going on, but there weren’t at the time.

I also tried to find a good deal on trash picking sticks or grabbers (something likethese), or kids gardening gloves (like these). But, I didn’t want to spend a ton on this activity.  Plus, I didn’t have time enough time to receive them before the activity.

So, I told the girls to wear clothes they wouldn’t mind getting a little dirty in and to wear good shoes.  However, most didn’t seem to get that memo and came in flip flops.  My husband and I wore our yellow Mormon Helping Hands T-shirts (that we received doing a different service project two years ago). I provided nitrile gloves for the girls to wear (that I picked up for cheap at Wal-Mart) and grocery bags to put their trash in.  I brought along some extra grocery bags, gloves, and big black trash bags.  And off we went, with a priesthood member in tow (in this case, my husband).

We left my house and then walked to the street behind our apartment complex, picking up a few pieces of trash as we went.  And then we got to the littered street.  And we started to really pick up bits and pieces of trash.  I told the girls not to worry so much about cigarette butts or glass pieces.  We found lots of empty plastic bottles, grocery bags, snack wrappers, gum wrappers, bits of paper, a diaper, empty cigarette packs, alcohol bottles, cardboard, straws, soda cans and more. 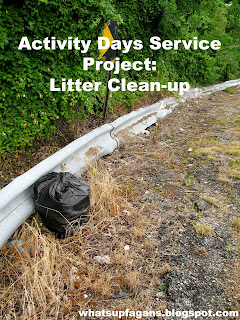 We ended up picking up enough trash to fill up three big black bags of trash in our 45 minute endeavor.  We left the tied bags along the street to pick up on our way back.  Where we stopped happened to be the worst part of the roadway, but we ran out of time, energy, and plastic bags to keep going, unfortunately. 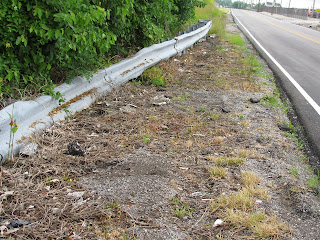 I went back the next day to pick up one of the bags of trash we had collected and was still overwhelmed by how much trash is on this strip of road…  It didn’t necessarily look like we had much the day before.  It wasn’t helped by the fact that it rained heavily that morning either.  But, we did help as evidenced by the trash bags we threw away.  But, we only did one side of the street.  If only we had more people involved and more time.  Maybe this strip wouldn’t be so trashy anymore.  Maybe we’ll have to do it again. 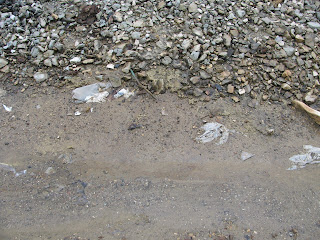 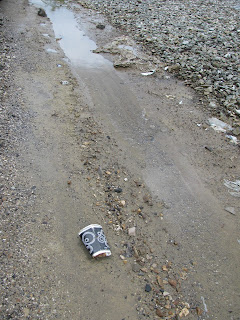 Appreciation and spreading the news

We received a lot of honks, horns, waves, and even a few thanks from cars driving by.  The girls loved waving to the cars as they passed by, and I freely let them do so.  The girls often shouted, “We’re cleaning up the neighborhood!”  I like to think that by being visible to those few cars that passed by that we were spreading the litter cleaning bug, and reminding people to be cleaner.

One guy even passed by twice, the second time stopping to give me $20 to go and buy the girls some ice cream from Dairy Queen to reward them for their hard work!  I had already bought them ice cream sandwich bars for a treat, but plan on donating the money to the Church’s humanitarian aid or some other such thing.

How they liked it

I am very proud of my Activity Day girls.  It was hot that night – 90 degree with high humidity.  We were dripping with sweat.  The girls didn’t like wearing the nitrile gloves I purchased because their hands were sweating in them.  I didn’t really notice or mind it too much, but I may be used to wearing them because of my long stint of being a janitor.  Most girls abandoned wearing gloves after about 15 minutes. There was some complaining, and sometimes not a whole lot of trash picking up going on, as they stopped to smell the honeysuckle (literally) and eat some honeysuckle too.

It was a tad frustrating that these, big 8-11 year old girls were complaining at times.  My three year old daughter was with me the whole time and picked up more litter than at least one of the girls there.  And my daughter didn’t complain until we were walking back home.  And I was sweating more than they were as I had a baby strapped to my chest in a baby carrier.  But, usually with some gentle prodding, they got back to work.  At the end, I challenged them each to pick up 5 pieces of trash, and then 5 more.  Worked like a dream.

Some of the girls really loved doing this.  And all of them seemed to enjoy being outside and spending time together, even despite the heat and the task at hand.

I really want the activity day girls to know that service entails hard work, but that hard work pays off.  And is very rewarding, though not monetarily.  I was a little put off that one of the girls wished a TV crew would come by and put them on TV, and that another wished that another person would stop by with a gift of cash.  I had to remind them that service is not about getting back, but about giving.

I loved doing this!  And I am so glad to learn that this activity can even be done with younger kids.  Both of my three year old daughters willingly and eagerly picked up trash, over and over again.

I encourage you to get out this summer, with your kids or youth group, and do a litter clean up in a part of your community that desperately needs it!  Service is good, and so is being outside!  God and the Earth will thank you. What have you done for an Activity Days Service Project?

*My affiliate links are used above.